Top 10 Best Things to Do in Viti Levu Island, Fiji 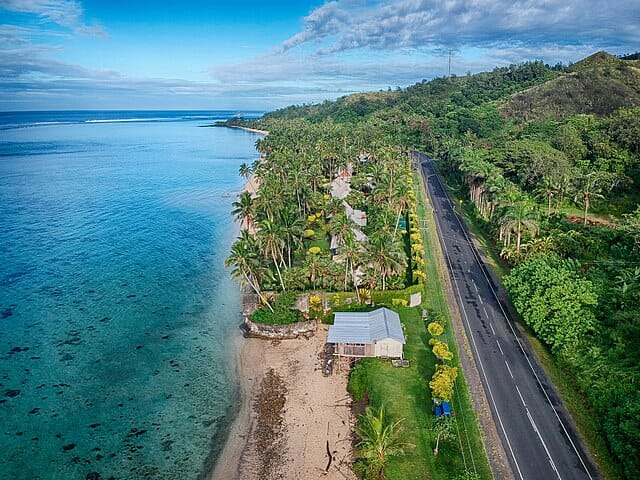 Viti Levu is the largest Fijian island with capital Suva lying on its south east coast.

It is the second largest of Fijian islands. There are plenty of things to do in Viti Velu 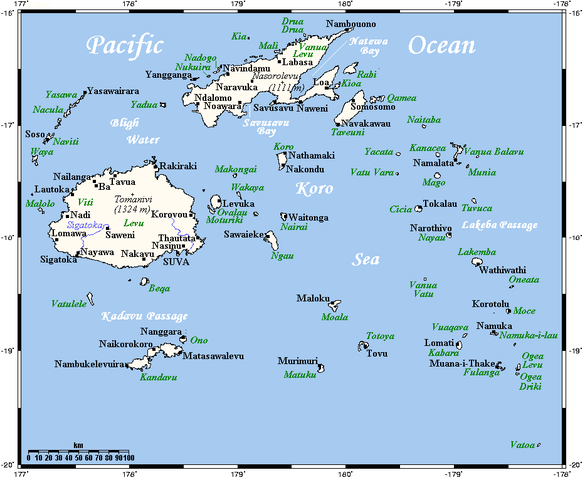 From the above map of Fiji, can you and I count 840 floating lands? Not of course. But we can easily see the islands of Fiji, occupy quite a lot of space in the South Pacific Ocean. The atlas says the Fijian islands comprise a staggering 3 million sq. km!

Viti Levu itself is spread over an area of 10,300 sq. km. Surely, there will be plenty of sights to see in Vitu Levu because of its size and also because of high population (approximately 8,00,000).

Simply put, this main island of Fiji bears nature’s wrath in the form of volcanic eruptions preceded by earth tremors, frequent storms that even causes the ocean to rise!

A mountain that runs from south to north almost divides the island into two. It is known as Mount Victoria.

Dense tropical rainforests are also part of the island’s geography.  On the western side of the mountain, the forests receive much less rainfall and hence remain dry through most of the year.

From Nadi International Airport, you can catch a domestic flight to Suva. In just half an hour, you will land at Suva from Nadi.

Driving from Nadi to Suva is also an option.

Top 10 Best Things to Do in Viti Levu Island, Fiji 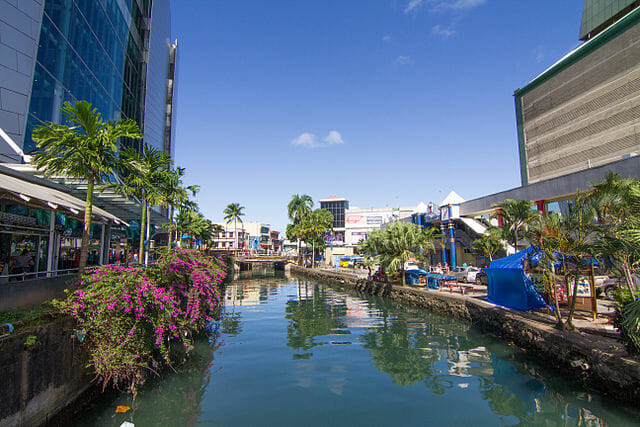 Being the capital of Fiji, the majority of the tourist make Suva as their base and proceed to see around the city and its lovely harbour.

The main tourist landmarks of Suva are:

This scenic park and garden is located outside the city of Nadi. It is rated as one of the top sites to see in Viti Levu.

A mountain that is seen as a backdrop of the garden is called the “Sleeping Giant” and hence the name of the garden.

A giant demon who ate humans, once slept for a long time due to over eating. He was the original sleeping giant who lived in the mountain.

The Sleeping Giant Garden is home to numerous colourful flowers that are native to Fiji.

It is sunny and picturesque. The garden is worth seeing.

You are touring Fiji, an archipelago of over 800 islands and islets. One of the major things to do in Viti Levu is to go on a tour of nearby islands that are inhabited and also to a few uninhabited islands to enjoy the deserted beaches.

The most interesting part of visiting Denarau Island is the driving part over a road built above the South Pacific Ocean. The view, and the sea breeze will not allow you to get off the car.

Denarau Island off Viti Levu Island is a very popular holiday destination for the Aussies and Kiwis. Even some well-read Indians are aware of the secluded natural beauty of the island and go there for a week-long holiday.

Resorts offer extraordinary hospitality to the tourists. The food will be mainly Indian cuisine.

The South Pacific Ocean welcomes you gleefully here. The sea is fantastic in this part of the world. Take a sailing boat and surge silently with the wind force; it is a bliss to enjoy the ocean silently.

For an out of the world experience, enjoy a drink or two in a bar that is floating alone in the ocean. It is known as “Cloud 9 floating bar. I think it is aptly named because that is how (on cloud 9) you will feel there.

The beautiful beach, a few water sports, a water theme amusement park, and the relaxed atmosphere of Denarau Island makes it as one of the top sights in Viti Levu, Fiji. Frequent boat rides from Port Denarau Marina are available to reach the Cloud 9 bar floating on a small islet.

If you are adept at catching fish, you will have a field day during your trip to Nadi or to Denarau.  Numerous fishing locations off Nadi and Denarau Island that can be reached by private chartered boats, and you enjoy your angling. Really, you would love the lazy act of fishing.

There are aerial tours of Fiji in a chopper. Don’t miss it. The aerial view of the South Pacific Ocean and the islands that are floating in it will be simply breathtaking.

Spas offer typical Fijian massage on the shore under the roof of small thatched huts.

I read the Denarau Island has 10 luxury resorts and some of them are for “adults only”. Naturally, they are in high demand.

It looks like Denarau Island demands an exclusive weekend trip. 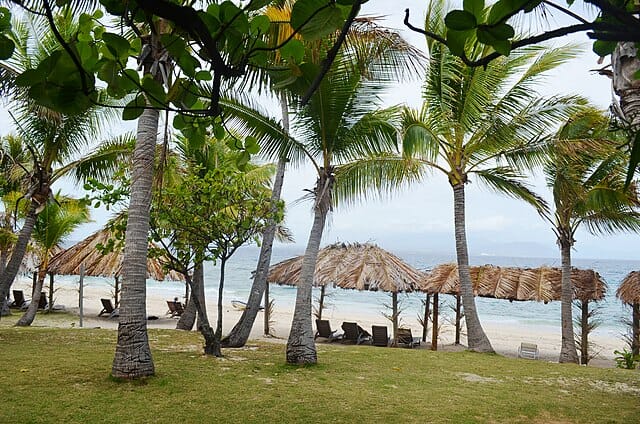 Ah, what a beautiful beach! It is a Fijian beach written all over it.

The Mamanuca Islands comprise 20 islands and the archipelago is found lying west of Nadi city in Viti Levu Island.

The names of some of the Mamanuca Islands:

This is one of the larger of Mamanuca Islands and the most visited among the 20 islands out of which, 7 islands are uninhabitable because, they are submerged during high tide.

Some very small islands are converted to resorts. You have a wide option to choose from 20 resorts. Some of them beckon budget travelers with cheap accommodation and food.

All the islands of Mamanuca archipelago can be reached in less than an hour from Nadi or Denarau Island which is more preferred.

Either as a day tripper from Denarau Island or a visitor from Nadi city, you can enjoy the less-crowded beaches and indulging in swimming, sailing, or go on a snorkelling stint and touch the reefs.

Similar to the semi-submersible vessel that is used in Australia to take tourists on a tour showing the marine creatures and the Great Barrier Reef, you can experience the same entertainment in Mamanuca Islands.

It will be the fun of your lifetime. It is a big attraction in Fijian Islands and one of the best sights in Viti Levu.

For your information, the Mamanuca Islands and the Denarau Island are two most preferred filming locations for the Hollywood film crew.

Sabeto is one of the towns in Viti Levu, on the way to Nadi from Suva, It has a firm dot in the Fiji tourism radar because of its natural hot springs, that are a rarity in Fiji. The adjoining mud pools have therapeutic properties.

“Wild Adventure” implies wildlife. This big attraction in Viti Levu is located in a small town known as “Sigatoka”.

Wildlife that you can spot here:

Isn’t it beautiful? The lack of crowd enhances the beauty  of the Natadola Beach, one of the top sights in Viti Levu. It may be useful to know that this beach is among the top ten beaches in Fiji. That is certainly a recognition considering Fiji’s 800+ islands and islets.

Fiji’s population comprises quite a big percentage of Indians, especially Tamilians who have been living in Fiji for more than a century.

The Siva Subramani Swamy temple is dedicated to the Tamil God Murugan. The temple is part of the attractions in Nadi.

Spend a few minutes at the only resort, see the traditional Fijian lodge and get back to your hotel in Nadi. 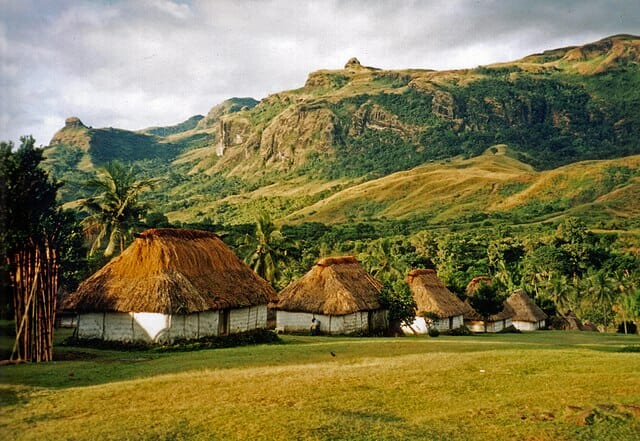 It is a place to see the early settlers in Fiji who are living very close to the nature. It will be interesting to interact with the villagers.

Nausori Highlands is a picturesque region in Viti Levu. Navala village is a well-visited tourist attraction in it.

Fiji and its islands will be more suitable to those who are eager to meet strange people, learn an exotic culture and enjoy the slow-paced, quaint life on a South Pacific Island.

If you find an organized tour of Viti Levu, buy a package. You will be visiting some of the remote islands around Fiji.

ShareTweet
Comments Off on Top 10 Best Things to Do in Viti Levu Island, Fiji Fiji 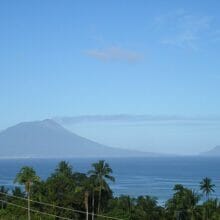