20 Arcane Things to Do in Hawaii 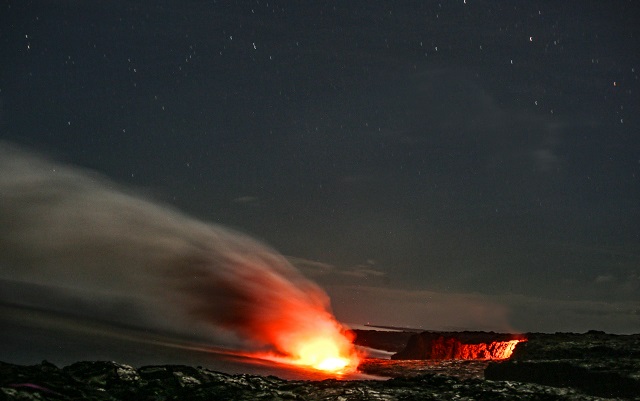 I have a sincere suggestion to all the future holidaymakers who intend to visit all the Hawaiian Islands. Please book an all-inclusive holiday package to Hawaii and make it a two-week extended stay. Don’t restrict your Hawaii vacation to just a week, because I am about to reveal 20 arcane things to do in Hawaii that only a handful of people know.

I am sure after reading this article to the end, you would pat your back for having read it and also will make serious plans for your two-week holiday trip to Hawaii.

20 Arcane Things to Do in Hawaii

Don’t assume Honolulu, Waikiki Beach, and Pearl Harbor alone are worth seeing in Hawaii. There are some stunningly beautiful, unexplored Hawaii tourist attractions that will surely make you release an audible gasp.

You might have read about the beauty of Waikiki Beach and how can you spend your time there, especially during sunset. Nonetheless, do you know an arcane thing to do near the Waikiki Beach in Honolulu?

Locate ‘Lumahai street’ on your Honolulu tourist map and go there. Walk a bit further and you will hear the screams of several adventurers who are about to take a 70-feet jump from the wavy cliffs and dive into the Pacific Ocean.

This is the site of the ‘spitting cave’ that is nothing but a deadly gap amidst colorful rocks. When the waves enter the cave-like structure with high ferocity, the water thrown back with venomous force with an audible sound. It looks like an act of contempt to me by the nature.

The sight of water thrown back from the cave and the accompanying noise is a terrific sight.  You would wonder as if some weird being sitting inside the cave spits the swallowed water.

Here, watch this wonderful video that captured the incredible ‘spit’.

Amazing-isn’t it? A visit to the spitting cave is not usually found in the Honolulu local tour itinerary. You have to add to your bucket list of obscure places to see in Hawaiian islands.

In one of the major Hawaiian islands, there is an active volcano called “Kilauea” that still attracts geography enthusiasts and adventure-minded travelers. 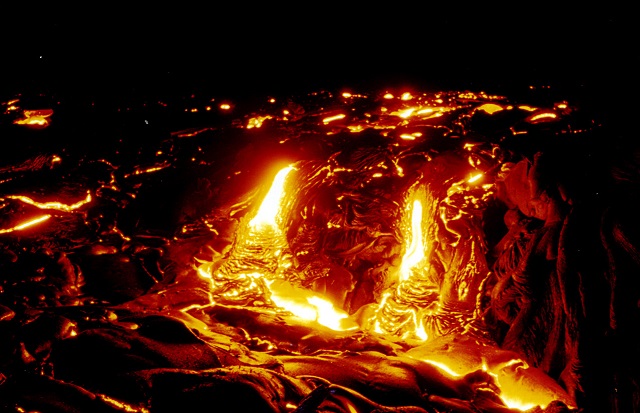 Though the volcano in Big Island is not spewing lava at present, when you go there, it is definitely one of the arcane things to do in Hawaii.

A rock that has a heart, Wailuku, Maui Island

Don’t assume it is man-made art on the rock. While the huge boulder itself is the outcome of a volcanic eruption, the heart-shaped cavity on the rock was the result of a natural erosion caused by the crashing sea waves.

What an obscure attraction in Hawaii! I think you stand in front of the rock with a heart and take a selfie.

Oh man, what a dreamy blue! What you see in the image is actually a ‘grotto’. The sea cave in Hawaii’s Kauai Island is a natural wonder and surely one of the top obscure places to visit.

The seawater entering the cave makes an underwater lake. When the water is still inside the cave and fairly full, you will watch an eerie blue glow out of nowhere.

The science says it is caused by the sunlight entering the cave’s obscure opening but the locals attribute the awesome blue glow to the sea Goddess of Hawaii that they worship.

The name of the place where the Blue Room can be visited is Waikapalae.

Won’t you be lured to explore this arcane thing to do in Hawaii? 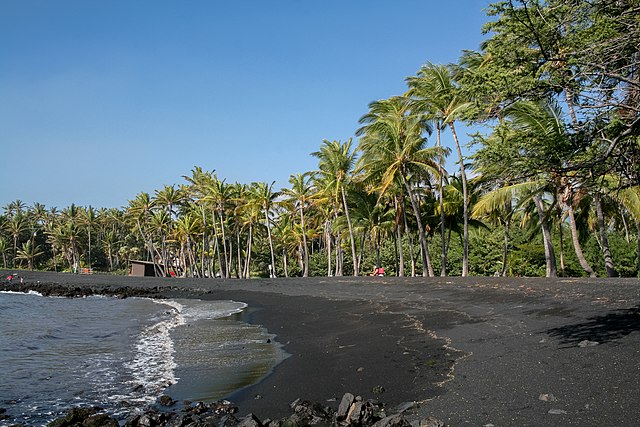 Black sand-covered beech is certainly odd but definitely not ugly. What do you say? Such colored sand beaches are not many in the world. Whenever we happen to be on an island, we should inquire if there are any other colored sand beaches such as pink, red, green, and white sand.

The sand color turns black when a volcano nearby erupts, discoloring its surroundings.

While this black sand beach in Big Island is not an obscure or lesser-known place in Hawaii, it surely is an arcane thing to do in Hawaii.

When you scoop a handful of black sand in Punalu’u Beach, this is how it looks. 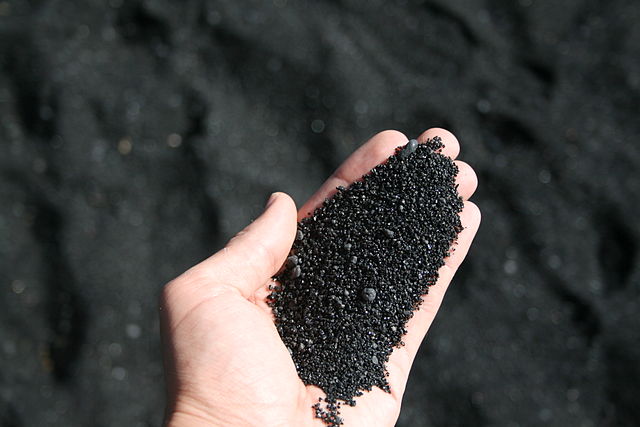 Among numerous obscure places to see in Hawaii, the Dragon’s Teeth commands a must-see attraction in Hawaii’s Maui Island.

This is another natural geological wonder in Hawaiian islands. Those ragged rock formations are all frozen lava that was washed ashore by gusty winds and big waves of the Pacific Ocean.

These unique places to see in Hawaii are many. I wish you don’t bypass them as you will never get another chance in your life.

This is a Wallaby that looks a shortened species of Kangaroo. 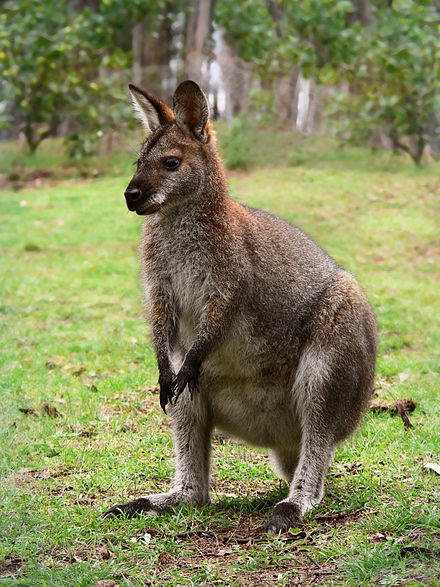 The story of a community of Wallabies in Hawaii is interesting.  A male and a female walabies were reported missing from the local zoo. They escaped to the tropical Kalihi Valley and started living a hidden life.

Well, they proliferated but still living their old life of a recluse. When you land in Honolulu during your all-inclusive Hawaii tour, try your luck to spot a Wallaby.

The Hawaiian tropical islands are volcanic in nature. When a volcano erupts, the surroundings are greatly affected. While the destruction of the environs is widespread, discoloration also occurs. 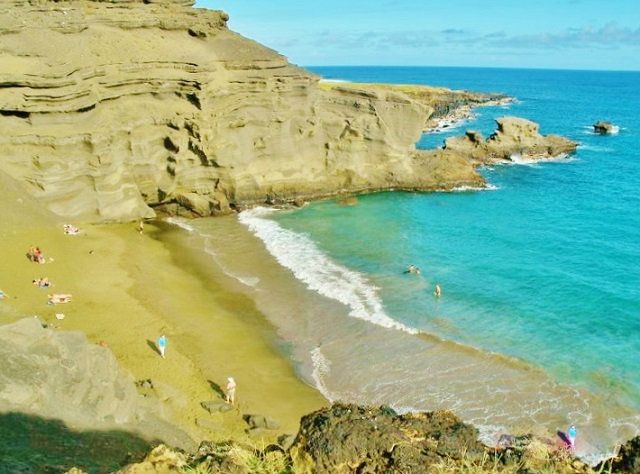 Yes, I must admit you can’t detect the green color in the above image. However, look below how green the beach sand appears. 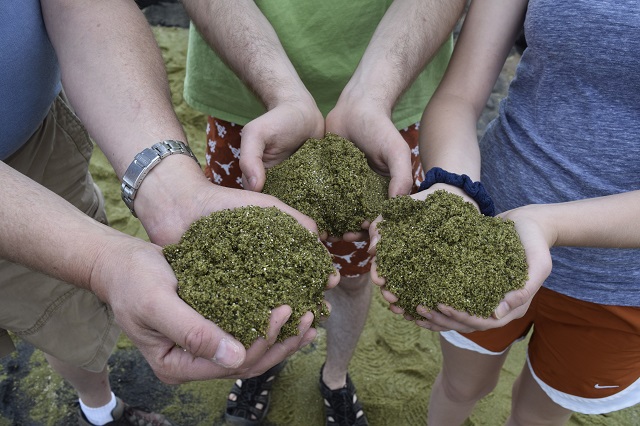 The green sand beach is one of Hawaii’s unexplored tourist attractions.

Don’t dare to ignore it, buddy, because, you might never get another opportunity to wet your feet on a green sand beach. There are only four beaches in the world that are covered with green colored sand.

Mauna Loa volcano is the culprit for the cause of green sand. When it erupted, its lava that contained very rare semi-precious ‘olivine’ crystals got mixed with the normal golden sand in the Papakolea Beach.

Do you know that Hawaii produces pineapple in large quantities that are equal to one-third of pineapple cultivation in the world? 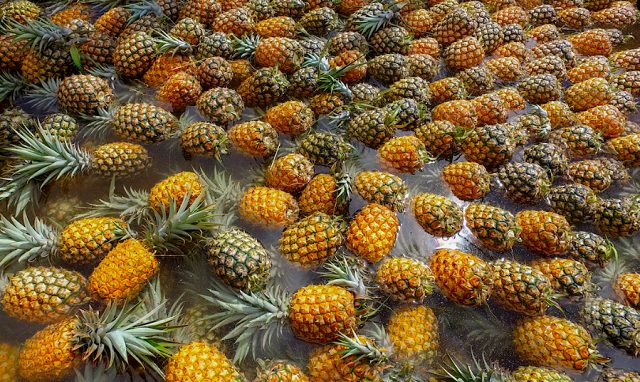 Similarly, the rare Macadamia nuts  are also grown in a big way in the Hawaiian islands. 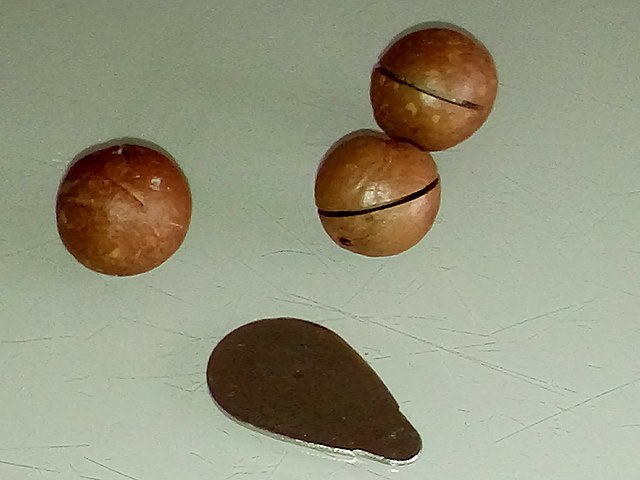 It won’t steal much of your time if you decide to visit the sites of production when you are touring Hawaii. Remember to ask for directions to ‘Dole Plantation’ when you are traveling in Oahu Island. 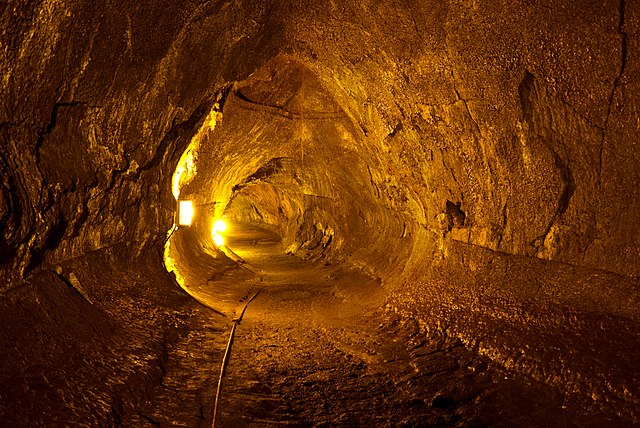 You might not have heard of the existence of a lava tube thus far. When you finally make your Hawaii dream vacation, you can actually enter a lava tube on the Big Island.

This rare attraction is rather one of the obscure places to visit in Hawaiian islands.

I think it is better to call it a ‘lava cave’ than a ‘lava tube’ because of the big size that invites you to enter it and explore deeper.

These lava tubes are called “Kaūmana Caves” by the local tourist guides.

Isn’t it one of the arcane things to do in Hawaii?

This large Buddhist temple that is located in Oahu Island is again another obscure attraction in Hawaii. Built amidst a blissful garden, it helps you to meditate in silence. Peace would envelop you as soon as you enter this unexplored attraction.

This is a freshwater pond under which a rare alga with a golden color appearance, grows.

Thus, the surface of the clear water appears magically gold and it is a mesmerizing sight to look at.

The golden pond is an obscure place to visit.

I wonder whether the present generation has ever seen a bamboo tree? Bamboo is a typical tropical tree and the bamboo has diverse uses for the man-kind.

In addition, Bamboo is grown in groves always and they require very little care after a stage.

Get it in Maui Island during your trip to all the Hawaiian Islands.

The bamboo trees let the sunlight in only through faint streaks. That sight is an unforgettable experience.

The bamboo forest is part of Haleakala National Park. Be alert to look for a range of tiny birds, living happily in the bamboo trees. 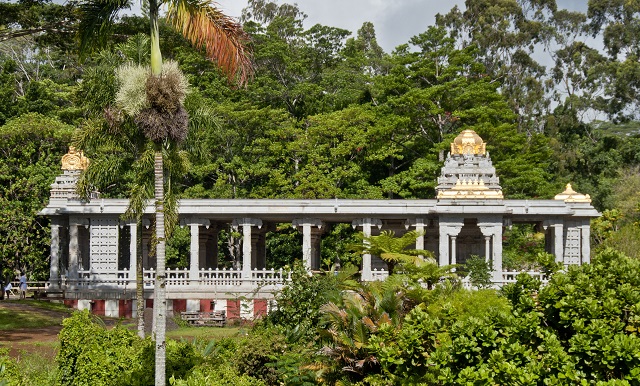 This is a Hindu temple in Hawaii that is constructed in Chozha Kingdom style and a Lingam made of white ‘spadika’ is installed in the temple. 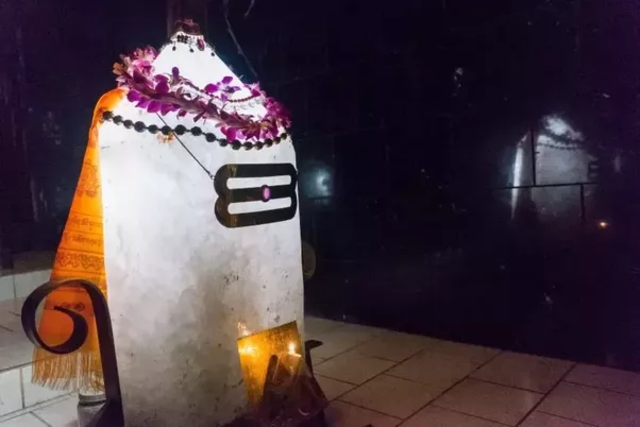 Iraivan is a pure Tamil word for ‘God’. Another surprising element of this unexplored Hawaii tourist attraction is the temple’s other name ‘Kauai Aadheenam’, one more pure Tamil word meaning a trust.

This Hindu temple is built amidst absolutely picturesque surroundings near the lovely ‘Wailua River’. 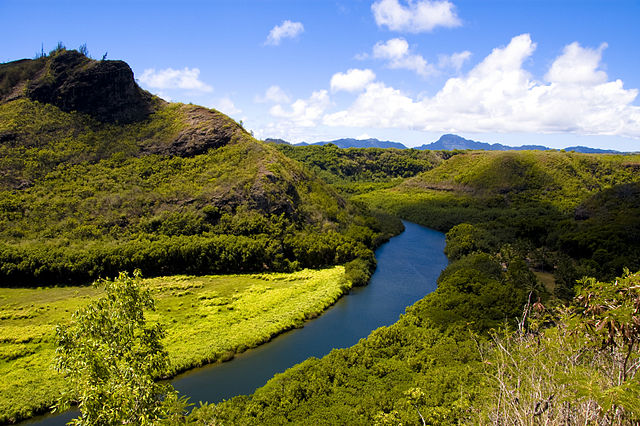 The entire temple built with granite stones, which is typical of temples found in and around Kumbakonam, a temple town in southern Tamilnadu state, India. 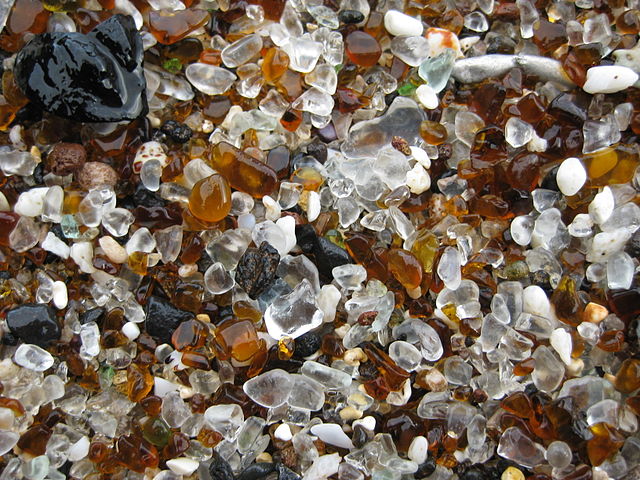 This is a unique beach among numerous beaches in Hawaiian islands. Inexplicably, only this beach in Kauai Island littered with glass pieces of various colors. No one knows why adjacent beaches are not so in Kauai.

Sailors who have thrown liquor bottles into the ocean over the years and these bottles broken by the relented waves of the Pacific Ocean were washed ashore but only on this beach.

I read two similar glass beaches are found in California.

Strangely, you won’t hurt your feet on this beach because the sharp edges have lost their cutting edges due to the pounding of water. 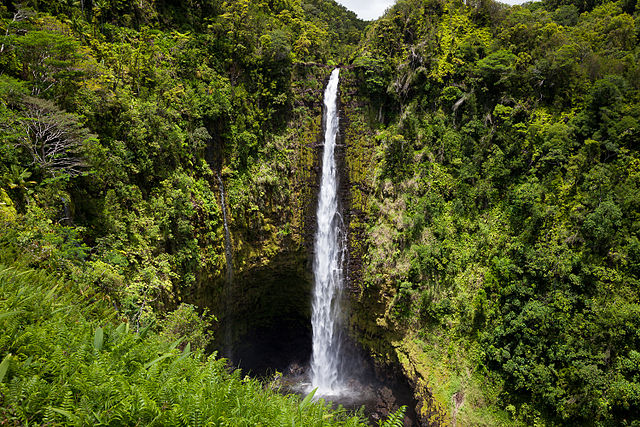 A gorgeous waterfall names Akaka Falla is a glorious sight to watch even from a distance. This is certainly not hidden as it can’t be obscure but it certainly an unexplored Hawaiian attraction.

The majority of the tourists to Hawaiian islands spend their time in sea bathing and having fun in their affordable beach resorts.

Only a few tourists with adventure flowing in their veins venture out to do arcane things in Hawaii.

Water falls from a height of a whopping 440 feet, making a thunderous landing.

Imagine a sacred Rudraksha bead tree in Hawaiian islands. From where in the world it went to the western world!

The Rudraksha bead is said to be a teardrop of Lord Siva and is considered highly sacred by the Saivites of India.

About one hundred rudraksha trees are found near the ‘Iraivan Temple’ in Kauai Island.

Did you see the numerous rudraksha beads that are strewn all over the ground?

‘Blue Marble’ is the English name for Rudraksha. The fruit of Rudraksha is in blue color and it is an edible fruit! 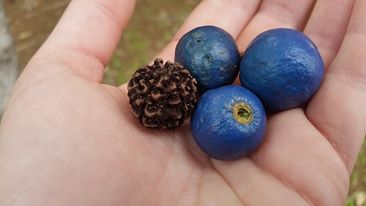 Blue Marble fruit and the Rudraksha seed inside the fruit. What a lovely blue shade!

The all seven sacred pools fed by natural cascaded and the whole complex of pools looks dreamy and pleasing.

It is a landscaped garden and attracts tourists of all age groups.

The way to this obscure attraction in Hawaii begins with dense bamboo forests on either side of the road. You have to climb several primitive-looking steps to reach the scenic pools.

The official name of this place is ‘The Pools Of Oheo’. They are part of the popular Haleakala National Park. 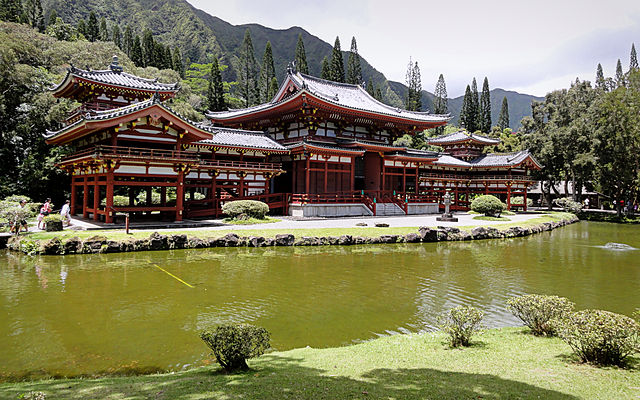 No, they are not temples actually but a memorial park where popular residents belonging to different religions and faith buried.

The small mountain that you see as a backdrop is known as Koʻolau mountains,.

Visiting this picturesque place in Hawaiian islands is certainly one of the arcane things to do in Hawaii.

Not only visiting obscure attractions in Hawaii are arcane things to do but also eating and drinking some of the local specialties-right?

Here, I have mentioned ‘eating’ honey. Doesn’t that sound odd to you. Let me explain. 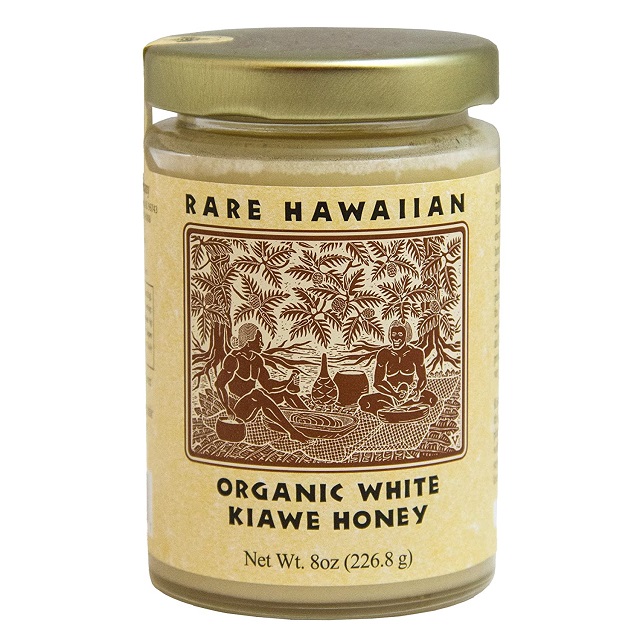 This Hawaiian white honey stored by bees that source their nectar from the ‘kiawe flower’. And, it found on the “mesquite” forest.

This white honey quickly solidifies into a creamy paste that you have to scoop out of the jar with a spoon and eat.

Though I have come to end of of unexplored tourist attractions in Hawaii, I have no doubt these tropical paradises have many more surprises in store.

Hmm… I envy the permanent residents of Hawaiian islands.