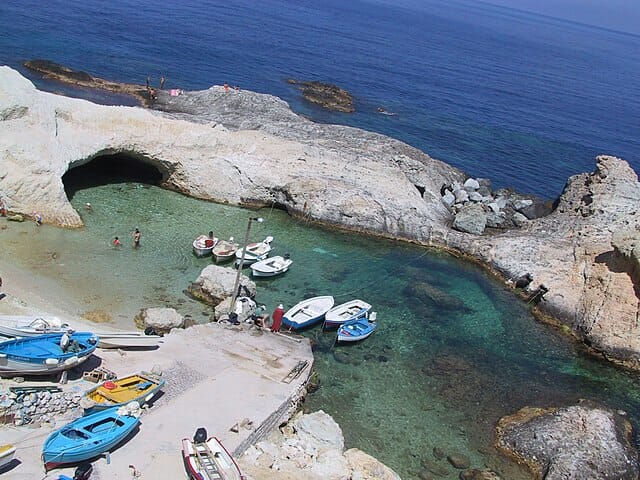 Today, we will see how to reach Pontine Islands in Italy, explore the islands attractions, see where we can stay, what can we eat, and also what can we buy there.

Italy has 400 islands and islets, including Sicily, Italy’s largest island. All the islands in Italy are floating in different seas that include:

Italians islands are the best islands in Europe as far as climate is concerned. Additionally, we all know how good the Italian food is. The Italian cuisine pairs excellently with the country’s great array of wines, and cocktails.

The Roman culture and architecture will steal our hearts always. Their sprawling piazzas, great cathedrals, gorgeous coastal towns beckon us throughout the year.

Let us get on with our business of visiting Pontine Islands. 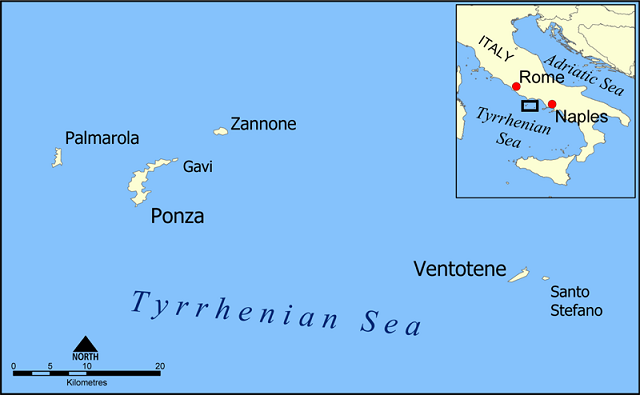 The square box on the map indicates the position of these Islands. They are located in between Rome and Naples and floating in Tyrrhenian Sea.

How many islands are in Pontine archipelago?

There are islands in the Pontine chain of islands, namely:

There is historic proof that these 6 Italian islands have been inhabited as early as Bronze Age. Geographically, these islands are volcanic in nature.

Ponza’s beauty is comparable with Capri, but Capri’s tourist crowd is absent in Ponza. The backdrop of cliffs offers spectacular views of the Tyrrhenian Sea.

How to reach Pontine Islands?

Ponza Island being the largest of the archipelago, naturally, we have to go to Ponza first and from there, we can reach out to other islands of Pontine.

Ponza is connected with Anzio, a port town south of Rome. They are separated by 50 km distance. The sea crossing time is 90 minutes only.

If you touring Naples and you want to visit Ponza, you can catch a ferry to your destination. You with your car will dock at Ponza’s harbor in roughly 3 hours.

Considering the lovely Tyrrhenian Sea, both the voyage will be pleasant and memorable.

Both ferries and hydrofoils offer transportation of passengers and their cars, along with other essential cargo.

So, Potine Islands are off the area of flights. I think it is a blessing in disguise, else we miss the adventure of sea crossing.

Moving within the island.

Additionally, there are mini buses operated by the island governing body.

What to see in Ponza? 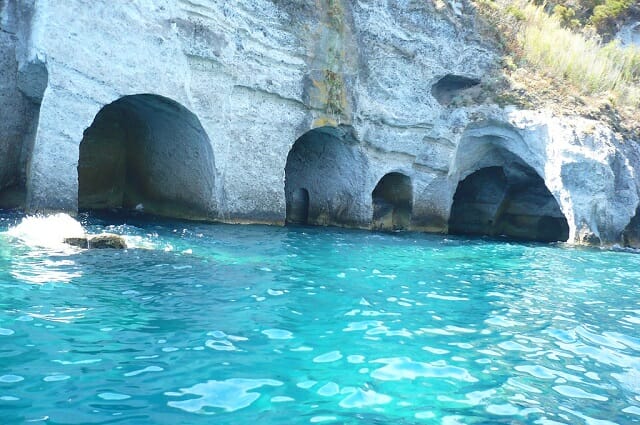 We have come to the second island of the Pontine archipelago. This is nearer (80 km) to Naples than Italy (120) km.

Ventotene’s climate is generally the talking point. Though it has a Mediterranean climate, the island experiences severe wind conditions, especially during the winter months.

Otherwise, it is sunny, which is what we are looking for in an island-right?

The island is rich in Roman history. During the reign of Augustus, he built two palatial villas here. The history then points out to numerous banishment, starting with the daughter of Augustus, who was exiled in one of his villas on this Pontine Island.

The pride of Augustus lay in ruins now.

This is the remnants of his Villa Giulia. The site and some more ruins are the main points of interest in the eyes of the local Italian guide.

Subsequent Roman reigns up to Nero has news of banishment of daughters and granddaughters.

Even during the World War II, this island was used by both the allies and Germans.

Ventotene’s coast is rich with marine lives that warranted the creation of a marine reserve and also a natural reserve that aimed to protect and preserve the ecology.

Another side effect of the island’s marine lives protection is the influx of scuba diverse, who were curious to find out the reason for the creation of the marine reserve.

In addition to the marine creatures, the coast is home to a few shipwrecks that piqued the divers’ interest.

As ever, if an area sees diving activities, then, there will be always snorkelers who are wary of scuba diving.

I don’t know whether cruise ships stops on the island, but certainly migratory birds do stop here. Ventotene Island is their resting point, similar to planes’ refuelling stop.

Consequently, an observatory of birds was created, and it recorded as many as 20k birds in 1988 itself. Naturally, the tourism of the island improved with the steady arrival of bird watching enthusiasts.

The island’s rich marine creatures helps the birds’ hunger in a big way.

As a matter of fact, Ventotene has a museum on migratory birds.

It is a beautiful beach with only about 20 meters of land area that is filled with black sand.

It has a ferry connection with a port city called Formia, located somewhere between Rome and Naples.

Of course, you can reach Ventotene from Ponza also.

This is our third island to visit in the Pontine Islands. It is the second smallest of the 6 islands and is located just a couple of kilometres southeast of Ventotene Island.

The main sight on this island is the ruins of a state prison, which has mentions in the Roman history books. You may like this piece of information, which says the island is now an abandoned. Yes, it is no more inhabited by the humans, but the migratory birds from Africa still visit the island annually to take rest and to feast on the abundant fish and other marine creatures.

Palmora Island is located on the extreme west of the Pontine Island chain. In spite of its proximity (10 km) to Ponza, the island is deserted. Yes, it is an uninhabited island that makes it a must-visit destination.

However, some entrepreneurs setup small eateries, but only during summer.

Islands that are not home to humans are great to explore. The flora and fauna will be exotic to us. Even we might catch a rare fish that we have not eaten hitherto.

The presence of rocks that are rather large indicates there are grottoes. They are exciting to look at. This island caught the fancy of a noted oceanographer, and he wrote that this is the most beautiful island among all islands located in the Mediterranean Sea.

Gavi is the smallest of all 6 Islands in the Tyrrhenian Sea. Though no one lives here, tourists are still taken to see some wildlife that is true to the nature-live wildly.

This is the last island in the Pontine chain of islands. It is too small an island to support any humans. I mean, it is uninhabited.

However, the island’s rich flora made it to be included as a part of Circo National Park, Italy.

Yes, there are a handful of hotels to stay. However, I believe the islands are good enough for making a day trip from either Naples or Rome.

I would recommend a dedicated day trip to Pontine Islands as they are naturally very beautiful and are not spoiled much by the tourism.