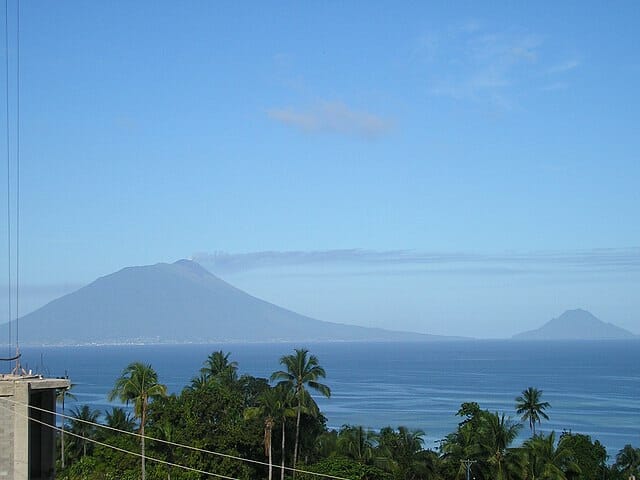 Maluku Islands archipelago is administered by Indonesia. The islands numbering a whopping 1000 are sprawled in between Sulawesi Island and Papua Islands. There are plenty of best places to visit in Maluku islands.

These islands are East Indonesia islands and are surrounded by the Molucca Sea, a part of Central and South Pacific Islands.

The Maluku archipelago comprises a huge 79,000 sq. km area. This means the islands are scattered around a vast area in the Pacific and are largely isolated and remote.

The map of Maluku Islands below shows the spread of big and small islands in Maluccu Sea. 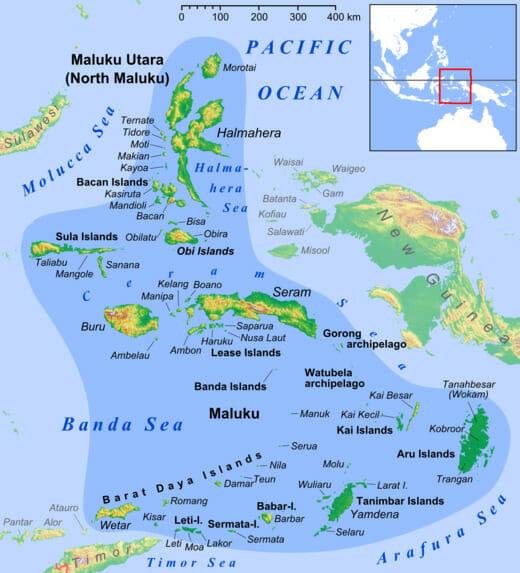 Another implication is, the majority of the islands are uninhabited and are covered by tropical forests, isolated but beautiful beaches, and unidentified wildlife and marine lives.

Before we know how to go to Maluku Islands, we should know the names of some of the big islands.

The names of the larger islands are given below:

The entire archipelago of Maluku produced huge quantities of cloves, nutmeg, and mace and thus was called the ‘Spice Islands’.

The lure the spice trade invited wrath to the native islanders from Portuguese, Spanish, Danish, and the English.

Let us see how to get to the two provinces of Maluku archipelago.

Ambon is reached by flights from several Indonesia cities including Jakarta, Makassar, and Manado.

Makassar is located in South Sulawesi and Manado is in North Sulawesi. The entire Sulawesi is one of the largest islands in the world and belongs to Indonesia.

While you can approach Maluku Islands by ships, none prefers that mode of transport in spite of 79 islands that can accommodate ferries in their docks.

Ambon acts as the gateway to several islands of Maluku chain. As many as 25 islands can receive flights from various cities of Indonesia. 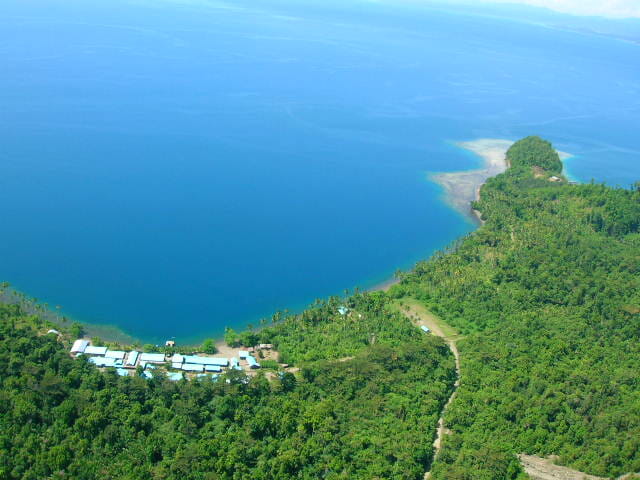 Attractions of Seram and Binaiya islands:

The main attraction of Seram Island is the Binaiya Mountain whose slopes are covered with thick rainforest trees.

The mountain has a very deep cave known as Hatu Saka.

If you have never seen a subterranean river, Seram Island gives you a chance. Sapalewa is its name. Don’t miss this; you may never get another chance.

Some of them are mentioned below:

Apart from these bird species, Seram Island is home to numerous rodents and marupilas that are said to be endemic.

Ardent nature lovers, rainforest buffs, and endemic wildlife researchers would instantly fall in love with this rich NP. There are as many as 6 mountains in the park of which the Binaiya Mountain is also one.

Quite a few bat species are found hanging upside down on the inner walls of the karst rock caves.

At the start of this blog post, I mentioned the Maluku archipelago consists of 1000 islands that are further part of several other archipelagos.

Similar to Seram Islands, Tanimbar Islands is one more chain of 65 islands that are all part of Maluku Islands.

Out of these 65 Tanimbar Islands, we will see about Yamdena Island.

This island also is quite large covering an area of 3000 sq. km approximately.

Yamdena Island too is known for its rich rainforest-covered hills.

These Maluku islands are all thinly visited by tourists. Hence, you will find the beaches are near deserted. You will have almost all of the island to yourself and enjoy unique beached to the hilt with your family. 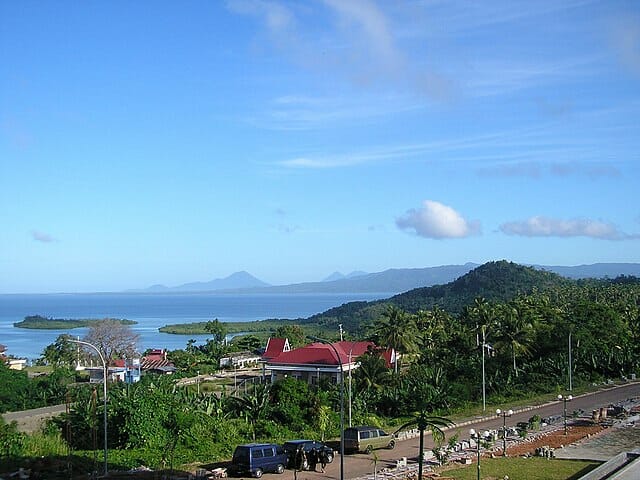 Look at the size of this Maluku island. It measures a staggering 17,780 sq. km! Think of the various things to do here. I am sure you may have to spend more than weekend in Halmahera Island.

As a matter of matter of fact, you may have to plan several trips spread over a few years to see all the best places to Visit in Maluku Islands.

You only need to locate an experienced tour operator who can give you customized tour packages to Maluku. I think the ideal search tern should be “boat tours of Maluku Islands”.

Halmahera Island is a part of North Maluku province. For you information, Indonesia has 38 provinces that extend up to New Guinea in the eastern Oceania.

This is actually a sea cove and is quite deep. No one has seen the end of the cave. Only up to 8 km, the cave was explored. So, don’t dare go beyond it, to get into the Guinness Book.

It is quite eerie down there-isn’t it? I am a chronic claustrophobic and thus would not enter the cove.

OMG! What a name! I looked at the images of this attraction of Maluku Island. It looked almost as dense as Amazon rainforests.

I don’t think no one has ever counted the exact number species of trees, shrubs, bushes, animals, birds, reptiles, and insects. The jungle is too dense for meticulous exploration.

This NP’s number of endemic bird species is responsible for the park to come under Birdlife International. A staggering number of 243 species of birds is to live inside Aketajawe Lolobata National Park.

Incidentally, Halmahera Island carried another name in the past. Jailolo was its former name.

Well, it is a naturally formed underwater garden. The rich and diverse underwater plants and animals draw scuba divers and snorkelers from all part of Indonesia, Singapore, and Malaysia. This is one of the biggest attractions of Maluku Islands.

It is an active volcano but now dormant. If you hike up to its crater, you can still find it filled with dark ashes.

Visiting this small lake is one of things to do in Maluku islands. The lake wears a startling blue drape and stores one of the clearest and purest waters in Indonesia.

There are bound to be waterfalls on such a tropical island that is almost covered with dense rainforests. There are breathtaking waters you can watch when you are touring North Maluku. Their names are Sapoli waterfall and Kahatola Waterfall.

You have more island hopping to do when you are visiting Maluku Islands. After all, there are  100 islands, friend!

It is a popular snorkelling spot and known for isolated beaches.

There are a few more uninhabited islands that are worth visiting.  They are all part of Best Places to Visit in Maluku Islands.

The only way to get to Tidore Island is to take a ferry either from Ternate in North Maluku or from the island of Halmahera.

Once an important clove producing island, it has lost its glory as a spice kingdom but did not lose its raw and rustic beauty.

First reach Ternate by flight from Jakarta. A speedboat deposits you on Tidore Island in less than half an hour.

There a couple of forts and a palace too. The Forts were built by the Dutch, when they seized the island from the clutches of Portuguese.

Other places to see also are of historic importance.

There is a beach here that people go but not to bathe in the sea but in a couple of natural hot springs.

You can see a dormant volcano called Kiematabu. Whenever you tour a foreign land and hear about the presence of a volcano, don’t miss seeing it. You are one of the lucky people in the world to go near or hike on a volcano. It is a geographical beauty.

Have you ever sipped a spiced coffee? It is a totally different experience. One of the things to do in Maluku Islands is to taste a spiced coffee called “Kopi Dabe” in Tidore. I assure you, it won’t be like a spiced tea (cardamom tea).

Due to lack of big hotels to stay and nothing much to see around, you can make a short day drip from Ternate, North Maluku. 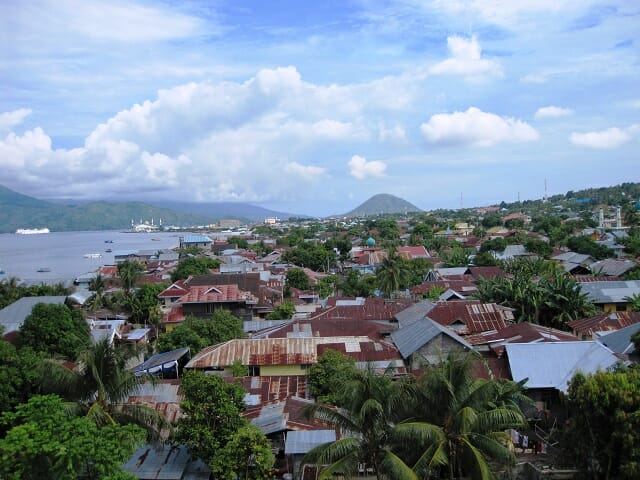 Ternate is one of the important cities in North Maluku province of Maluku Islands. It also acts a gateway to several neighbouring islands.

Ternate is well connected with flights from Jakarta, Makassar, and Manado.  Even Ambon city in Ambon Island operates flights to Ternate.

Similar to Tidore, Ternate’s main attractions are forts and mosques. Forts were built both by the Spanish and Portuguese.

Sulamandaha Beach is where you will notice the black sand. It is due to a volcanic mountain that arises from the sea. However, the water on the sea is clear and good for snorkelling.

Since Ternate is situated on the western coast of North Maluku, sunset watching is one of the things to do in Ternate’s beaches.

This Maluku Island’s dense tropical forests attract forest lovers from Singapore, and Malaysia. Morotai Island is quite a large island. Its length is 82 km and the width is almost half of the length. It is administered from North Maluku province.

Morotai is located at the tip of Maluku Islands’ northern side. Even Halmahera Island that is a part of North Maluku is 120 south of Morotai.

Reaching Morotai Island is possible from Ternate by flight. Another option is ferry that leaves the northern port of Halmahera Island.

Places to see in Morotai Island include:

The Morotai Island has a few hotels but I think the island is a rather less-visited Maluku Island.

So, you have Best Places to Visit in Maluku Islands. To be precise, North Maluku seems to be more worthy of visiting than Ambon Island, which a part of Maluku Islands.